There are many different types of martial arts that you can learn to protect yourself should you ever be attacked while you are walking down the street. In the article below we are going to take a look at some of the best martial arts for defending yourself. Jujutsu is perfect for self-defense as it uses the attacker’s aggressiveness against them. When someone who is trained in jujutsu is attacked, they can redirect their attacker’s energy and momentum to turn the fight in their favour. By redirecting the attacker’s energy, the Jujutsu fighter will make the attacker weaker, giving themselves a chance to strike back and defend themselves. The majority of moves used in Jujutsu are joint locks, which is where immense pressure is applied to weak joints such as the elbow or knee. There is also quite a few different types of throws too. Using throws and joint locks in tandem is what makes this type of martial arts so deadly.

If you sit down to see a martial arts movie and you see a lot of high spinning kicks, then the fighters are probably using Taekwondo. These power and quick high kicks are what make Taekwodo a very effective way of defending yourself. If you are attacked and you manage to hit your attacker with a few Taekwondo-style kicks, it is safe to say that they will not be winning this fight and that they will think twice before they attack anyone else. This is the only type of martial arts that you will see at the Olympics.

This martial arts style has been designed in such a way to neutralise the enemy as quickly as possible. The moves are often quite simple, and they are usually quite dirty. The aim of Krav Maga is to neutralise quickly, so that you are not harmed in any way. Unlike with other martial art types, attack and defense are combined in Krav Maga. Instead of blocking and blocking until you can fight back, you defend in a particular way so that you can counterattack. When you are training in Krav Maga you will be told to aim for the eyes, neck, throat, and groin of your attacker. 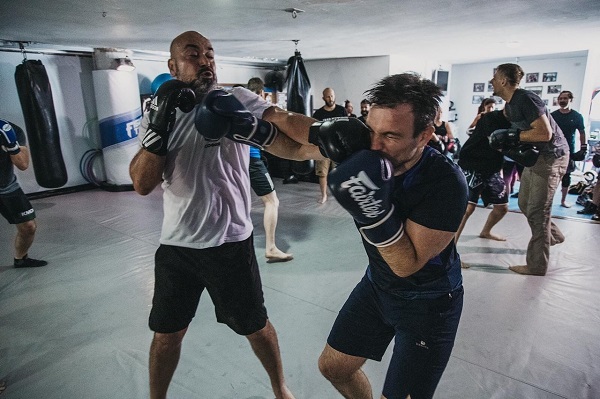 This type of martial arts is one of the best for defending yourself from a would-be attacker - nearly every MMA and UFC fighter has been trained in this type of martial arts. It teaches users to use their leverage and weight to defeat larger opponents. It is a mix of takedowns, ground control, and submissions - these have the ability to be deadly as users learn a variety of chokes, cranks, and joint locks. A joint lock puts enough pressure to break bones, a choke will cut off the person’s oxygen supply, while a crank will twist the attacker’s body into a series of unnatural positions.

When it comes to using martial arts to defend yourself, Muay Thai is probably the best one there is. This type of martial arts has been designed in such a way to change different parts of the body into dangerous weapons. When you become a master of Muay Thai, your elbows become like a hammer, your legs become a hard staff, your knees can act like an axe, while your shins and forearms can be used to defend your body.

What You Need to Know about Betting on Mixed Martial Arts

Mixed Martial Arts, shortened to MMA, is something that dates all the way back to 648 BC. Nowadays, it is one of the fastest growing sports out there, and this is thanks to the Gracie family as they introduced Brazilian JiuJitsu to America in the 90s. In 1993, the UFC received 86,000 pay-per-views, while the fight between McGregor and Khabib a few years back racked up 2.4 million pay-per-views. Below we are going to look at how you can bet on MMA and how choose the best boxing betting sites.
read more

Four Great Reasons Why You Should Take Up Martial Arts

Many people contemplate taking up a form of martial arts, but most people who think about do only that - it is the minority that actually go ahead and decide to take on the challenge of learning a new skill. If you are the type of person that is contemplating taking up a form of martial arts, then read the following six reasons why you should, and we are sure that come the end of the article you will have made your mind up.
read more